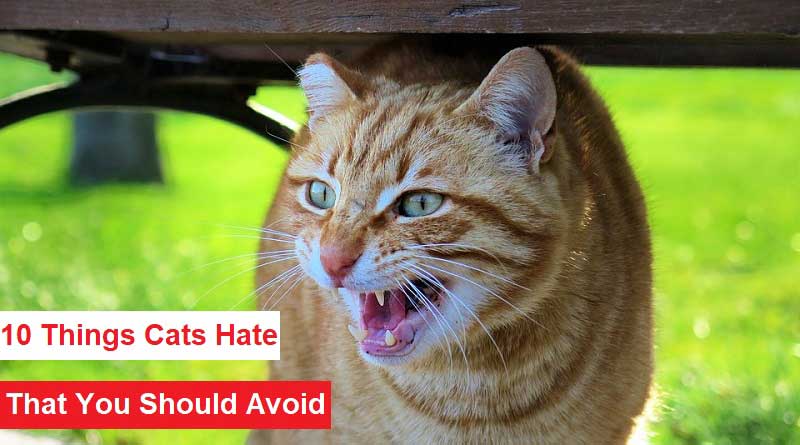 Cats are brave, self-confident, playful, and affectionate animals, but they are also sensitive with particular fears in the hatred of certain situations. Do you want to know what they are? in this article, we discussed the top 10 things cats hate. So you can both understand your cat better and avoid unnecessary stress or suffering.

Water is one of the things many cats hate the most. Even if we leave a few drops fall on their body that are likely to flee in a split second. It’s important to note this doesn’t happen with all cats and there are some felines you actually tolerate water very well.

The reason why many cats hate water is not well understood but one theory suggests it is due to the origin of domestic cats. As many come from desert areas in the Middle East and Asia, it is believed a lack of contact with water set their preference for generations down the line.

Although a cat’s sense of smell is not as acute as that of a canine, it is still well developed and they can perceive a great variety and intensity of odors. This is why cats hate strong smells such as vinegar, onion or gasoline.

3. Forcing them to do something they don’t want

Cats like their space and to feel free, this is why they generally dislike hugs and kisses as this human display of affection can make of cat feel trapped.

Forcing a cat to do something they don’t want to can lead to stress anxiety and even fear. This can even result in aggression directed towards us in the form of scratching and biting.

This does not mean cats are not affection animals, it simply means we need to respect their feline nature.

The arrival of strangers to their territory is one of the things cats hate most. If they had been socialized since they were little, they usually don’t present problems with unknown people or animals.

However, most cats run and hide when someone outside the family visits the home. Cats like to feel they control the environment around them, the arrival of a stranger comes with a lot of new smells and signs they have yet to experience.

For some this awakens our curiosity but causes fear and insecurity in Many.

Their sense of hearing is well-developed making it unsurprising that noise is tolerable to us can aggravate them intensely. This is another reason it is not recommended we shout at or scald a cat for behavior we deem unsuitable will only lead to stress anxiety and resentment.

Positive reinforcement is both a much more humane and effective way to promote good behavior.

Anyone with a cat knows how much they like routine and are highly sensitive to change. As they need to feel in control of their environment a sudden change can unbalance them completely.

The best way to keep your cats happy and healthy is to keep their routine, and yours, as consistent as possible.

So if you have to change something big in your house or even move to a new one, prepare your cat in advance with the necessary measures and try to introduce them gradually.

This point is closely related to the previous one. In the same way they hate change, cats hate the surprise factor which humans often enjoy.

You may at some point have seen videos of cats being scared by cucumbers, but what usually happens is now that they are afraid of the cucumber itself but the fact they have been able to get so close to them without being perceived causes fear and anxiety. They may have the same reaction with any object they do not expect to see.

Although it seems funny surprising the cat is a way to create anxiety and stress so we recommend looking for other healthier ways to have fun with them.

Round, silent, slow-moving, and able to fly. For cats, it is difficult to understand what a balloon might be. In many cases, they are mistaken for a threat or even a predator by the cat.

No animal likes to be stared at for a long period of time, and cats are no exception. With their Guardians, they may not show any fear, but with strangers, they may feel threatened and react violently or flee.

Cats are very clean animals, so much so that a large part of their day is devoted to self-grooming. For this reason, they need their environment to be as clean as they are. Cats hate their litter box to be dirty, their water will not renewed daily, or their toys to be grimy.

What is it that your cat hates the most? let us know about it in the comments.

Cat Behaviors: 7 Things Your Cat Wants You to Know

10 Rarest Cat Breeds From Around the World