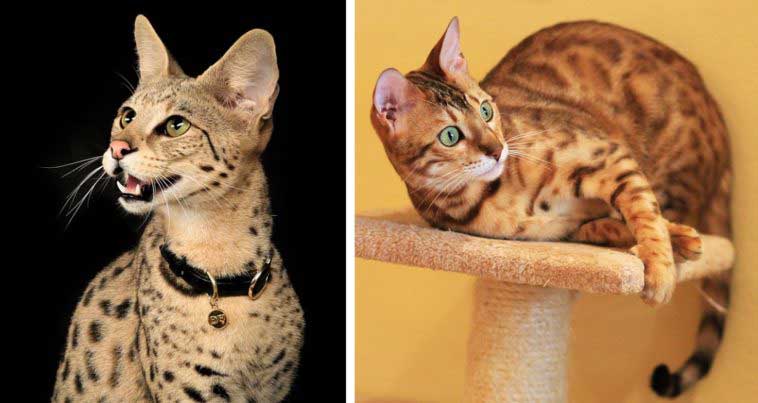 Probably, You’ve heard of these two cat breeds: Bengals and Savannahs. These are cats that look such as leopards, ocelots, margays, and clouded leopards…their beauty is captivating with their beautiful spotted dress.

Bengals were first accepted as a breed by The International Cat Association (TICA) in 1986. And the Savannah Cat became a registered TICA breed in 2001.

Bengals and Savannahs too large popularity

The demand for these two breeds has increased exponentially over the last ten years. Never seen in feline history !. Two of the most popular hybrid cat breeds.

Bengals and Savannahs are hybrid breeds: they come from a cross between a domestic cat and a wild cat, an Asian leopard for Bengal and a Serval for the Savannah. The result of this cross is called F1, first-generation, and this cat has 50% wild blood. Subsequently, we can cross this feline F1 again with a domestic cat to get an F2, and so on until the fifth or sixth generation.

In fact, because there are so many restrictions regarding hybrid breeding, it is likely that you will end up with an F5 or later.

Bengals and Savannahs are not bad cats. However, if you want to adopt one of these two cats, you must be equipped with solid behavioral notions and you must have plenty of time to deal with them. It is only in these conditions that you can fully enjoy the majestic character of this gorgeous creature!

There are many similarities between Bengals and Savannahs, both cats are highly intelligent and active and playful, and have a high-energy. Unusual to other breeds, both Savannahs and Bengals love water and playing in it. They are also easily leash-trained.

What are the differences between them?

There is a huge size difference between these two breeds. Savannahs are much larger than Bengals, in size and weight. This means that the Savannah can jump higher, and run faster.

Bengal coats have either a marble pattern or a spotted pattern unlike the Savannah,
and also notoriously more detailed than that of the Savannah.

The Savannahs have bold black spots accented by either a golden, silver, smoke or black background. Bengals are brown, snow or silver.

Have you already made the choice between Bengal or Savannah cat? Let us know in the comments!

Can Dogs Eat Cat Food And Is This Really a Problem?