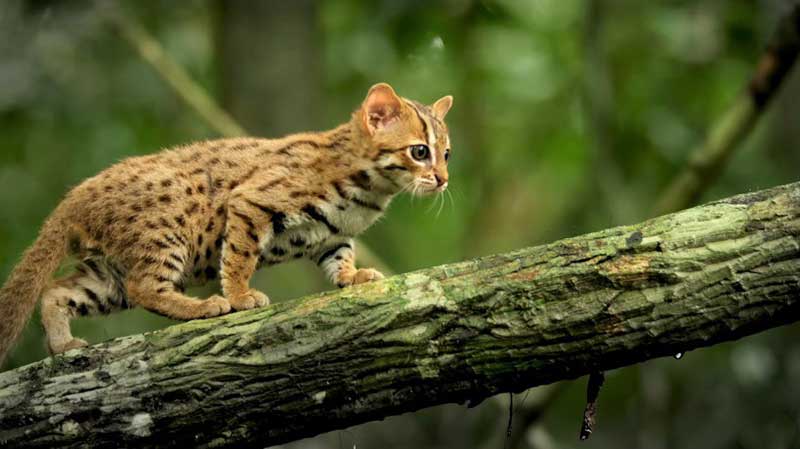 Nature is a major source of cuteness. Yes, it is home to millions of cute animals. In this list is the rusty-spotted cat, which is the smallest cat in the world. This adorable wild cat can easily fit into human palms, even in adulthood.

The Smallest Cat In The World: the rusty-spotted cat

These cats are found mostly in the Indian rain forests and in the tropical jungle of Sri Lanka, with sporadic sightings in Nepal’s Terai region. The animal turns out to be the smallest wild cat in the world. A status that only the black-footed cat can possibly dispute with him.

BBC delivers exceptional images of this little furball that lives in the wilds of Sri Lanka. the object of the lust of traffickers, hoping to protect it better.

The near-adult rusty-spotted cat is seen jumping over water and roaming the woods, searching for food and exploring the premises. And it’s adorable!

The smallest cat in the world characteristics

Much of the small cat’s cuteness comes from its size and coat. Measuring between 35 and 48 cm long (14 to 19 in) in length, their tail measures about half the length of their body. Its average weight is barely 1.5 kg (3.3 lb).

The smallest cat in the world diet and nutrition

A nocturnal creature, the tiny feline avoids venturing into the jungle during daylight, so as not to cross the path of larger predators in the area.

When it comes to meals, like many of its similar felines and other domesticated cousins, birds and small mammals are their main course. However, they also dart towards other small prey like insects and frogs.

According to the IUCN Red List, the Rusty-spotted cat appears to be on the list of near-threatened species.

The biggest threats to these small wild cats, in both India and Sri Lanka, are the destruction of their natural habitat due to the growing human population. Luckily, they are legally protected throughout most of its range and hunting is prohibited.

Watch this adorable video of the rusty-spotted cat roaming wild in its natural habitat!

Can Bengal Cats Go Outside? What to Consider

Adopting a Bengal Cat: How to Choose Between a Breeder and a Shelter

What Is Cat Scratch Disease? Could Your Cat Kill You?

Can Bengal Cats Go Outside? What to Consider