Just like every other day, Dongsuk the stray cat picked up the bagged food and carried it away. But this time determined to find out where the stray cat was headed. The woman who’d provided the food decided to turn detective. To this end, she followed Dongsuk to a lonely rooftop where the stray cat dropped the bag and waited. In the shadows, the woman followed suit with the cat-loving sleuth finally discover what on earth was going on.

A mother’s love knows no bounds. It doesn’t matter if the mom is human or is furry with four legs, her love for her babies is endless.

SBS TV, on September 26th, 2017 posted a footage on YouTube featuring an unknown Korean woman with a passion for stray cats. She not only worked at an animal shelter, but she also took her dedication one step further. You see, the woman spent her evenings feeding stray cats.

This had been going on for five years, the kind-hearted woman’s generosity had been helping to keep the neighborhood stray cats alive. All cats would eat to their full with the ladies daily treats. All except one stray cat, the brown and white stray that the woman called Dongsuk had peculiar habits indeed.

It wasn’t that Dongsuk was aggressive, she was just choosy about her food than the other stray cats. The woman noticed one odd thing about Dongsuk. She was only interested in food that was still in baggies. 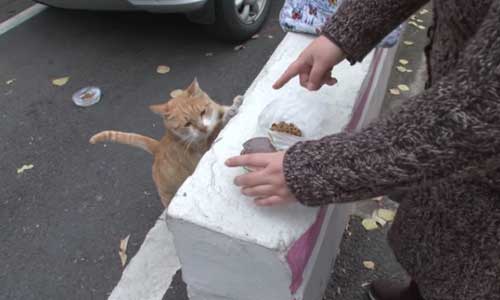 However, still the cat’s unusual behavior continued. She picked the plastic food bag up with her teeth and ran off with it.

Why did the stray cat do that?

The old lady still had no idea why, but she was determined to find out. One evening, the woman decided to follow Dongsuk to solve the rest of the puzzle. She followed it very carefully.

Dongsuk led the woman to an old rooftop. Once there, the stray cat dropped her food baggie and waited. If Dongsuk wasn’t eating the food, what was she doing with it?

In a few minutes later, they had their answer. When a tiny kitten came scampering up to meet her. At last, things became clear: Dongsuk was a mommy, and everything she was doing was for the benefit of her baby. The volunteer and her friends were nearly in tears! , and decided she had to do something to help. 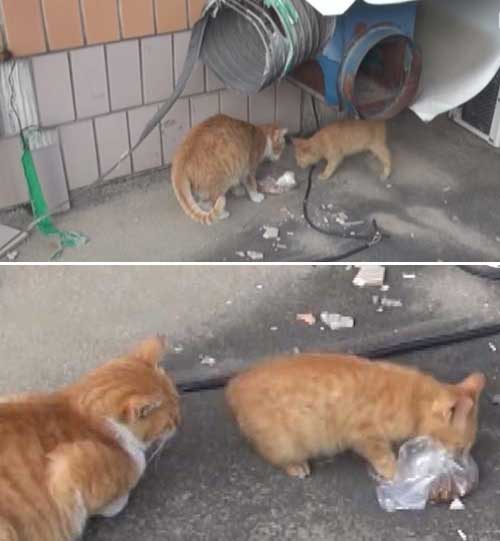 So the woman decided to take both stray cats to a new safer home, with a family that adopted them and promised to love and takes care of them.

See for yourself how this sad story turns out in the video below.

Are You Planning a Vacation Without Taking Away Your Bengal Cat?

How to Have a Happy Bengal Cat