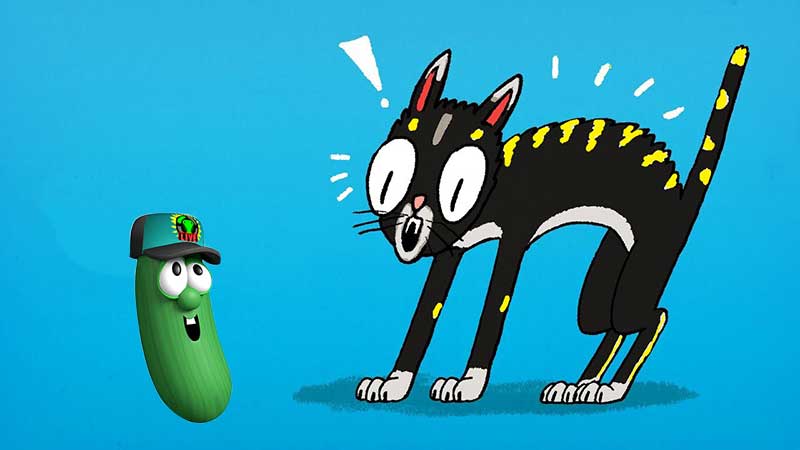 No matter how you feel about cats, you’re gonna find this one interesting: the unfunny reason why cats scared of cucumbers. Now, I’m sure you’ve all seen the memes, gifts, and videos of cats literally leaping into the air and fright at the sight of a cucumber. This can look outright hilarious to us humans and it seems so random that an animal related to the ferocious king of the jungle would be so scared of a simple fruit.

Why are cats scared of cucumbers?

So, what’s the deal anyway? Why do cats find cucumbers so repulsive that their initial reaction is to scamper away when they see one? Well, we’re as puzzled as you are.

What experts have to say about Cats and Cucumbers?

Let’s see what experts have to say about this cat and cucumber phenomenon.

What’s going through a cat’s brain during all of this? Don’t forget that cats are basically miniature lions that sometimes show dominance, impulsiveness, and a bit of neuroticism.

It’s natural for this stealthy creature to be suspicious which is sometimes mistaken as being curious of their surroundings, especially in an unfamiliar environment.

Domestic cats, even though you always find them lounging on top of a bookshelf or dozing on your couch, are still highly skilled predators and always in a state of heightened alert when they hunt for their prey.

They’re wary of flashing lights, the infamous laser dot, noisy toys, and any moving items before them. And they’re not really afraid of us humans insists in the words of Dr. John Bradshaw, a biologist at England’s University of Bristol, who studied cat behavior for 30 years: “our feline friends only think of their owners as a larger dumb non-hostile cat, or to make it less offending – a mama cat”.

So, why on earth are they such scaredy cats when it comes to cucumbers? Animal experts aren’t quite sure. They have a few theories but they all agree that cats aren’t petrified of the cucumber itself.

Why are cats scared of cucumbers? The first theory

Certified animal behavior specialist Dr. Roger Mugford, puts it down to simply being caught off guard during a moment of vulnerability.

Remember, a lot of these pet owners sneak up on them when they’re eating which is when a lot of creatures, whether human or animal, feel most relaxed and place the cucumber behind their back.

So, just imagine if someone snuck up on you from behind while you were blissfully having a meal. Of course, you’d be startled. And probably not by the person themselves, if you know them at least, but just by the mere unexpectedness of it all.

Why are cats scared of cucumbers? The second theory

Another theory is that cats mistake cucumbers for snakes. According to Dr. Constantine Slobodchikoff, an animal behaviorist and professor at Northern Arizona University, the long green shape of a cucumber looks enough like a snake to have the cat’s instinctive fear of the reptile kicked.

Our feline companions are hardwired to avoid these slithering beings at all costs because snakes can kill. Whether it’s because of the fear of the unknown or a phobia of snakes, it’s still not a good idea to pull the cucumber prank on your poor kitty.

Actually, the same goes for bananas, pineapples, or fake spiders, they can evoke the same strong reaction. Cats are not used to being caught off guard. Again, especially when they’re eating and have their guard down.

Can it do any damage on cats’ psyche?

Startling them for fun can do some serious damage on their psyche.

You’re basically tricking them into thinking there’s a deadly predator or danger nearby. Which causes them psychological harm and stress.

Of course, I know you don’t want that for your fur baby. But once again, let’s take it from the experts: Dr. Slobodchikoff says “it can inflict psychological trauma, not only because of the cucumber but also the places where the green invader was presented to them”.

According to the pet care site Vetbabble, it can lead to anxiety, aggressive behavior, and even PTSD.

Cat behavior consultant Dr. Mikel Delgado explains that if cats feel threatened, particularly at their food stations, they can lose their appetite. And when cats don’t eat, they can develop life-threatening fatty liver disease.

What can happen to a cat in response to this?

Cats love to be in control, there are a creature of habit. So, they can become distressed when their human changes their routine or does something unpredictable.

Based on a study conducted by the College of Veterinary Medicine at the Ohio State University, cats may exhibit sickness behaviors in response to unusual external events, like the infamous cucumber.

The common sickness behaviors are vomiting, refusing to eat, diarrhea, and urinating outside the litter box.

The symptoms your cat might be suffering from stress

Marilyn Krieger, a certified cat behavior consultant, points out other symptoms that your cat might be suffering from stress.

Our furry feline buddy is a sensitive being which is why you should be a considerate pet owner. You don’t want your kitty to distrust you or feel on edge in their own home.

So, be a responsible and caring mama cat by gradually introducing new items such as cucumbers to them. Let them study it at a safe distance and get familiarized with the object on their own terms instead of shoving it in their face or behind their back.

It’s certainly amusing to watch those cats and cucumbers or cats not like banana videos and have a good laugh. Since cats unlike their canine counterparts, our models of being cool, calm and collected seeing them go out of character is a rare and funny sight to behold.

But try to put yourself in their pose that is and think how would I react and feel if someone scared the heck out of me over and over again in my own home.

What may seem like innocent fun, could be considered animal cruelty if you think about it.

That might be true that not all cats scared of cucumbers, it’s still not a valid reason to experiment this trick on them, even for the sake of science.

So, please, don’t scare your poor kitties and speak up when you see someone else doing it to theirs.

Which of these scientific explanations of cats cucumber phobia do you think is true? And how do you feel about all those videos online showing this sort of thing?

Bengal cat breed: 8 Secrets That Nobody Will Tell You!